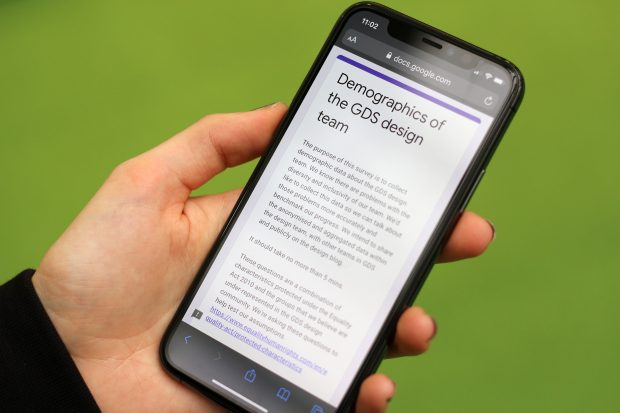 The GDS design team has paid close attention to diversity issues for many years. Like the wider Civil Service, we want to reflect the society we serve. Based in London, with its many diverse ethnic groups, we strive to reflect the city’s people. For example, people who are White British represent less than 50% of the London population and 37% of the population were born abroad.

From experience, we know that diverse teams are better teams and deliver better outputs. There is significant scientific evidence to show that multi-cultural teams have fewer blind spots, that diverse groups can outperform high-ability groups and that they are more innovative.

To progress and increase our design team’s equity, we first needed to understand where we are. At the end of 2019, we sent a demographics survey to everyone in the design team and asked them to share their data anonymously with us.

With a bit of nudging, we had 29 responses from the 29 people in the design team (at the time the survey was sent).

Here is how the design team responded:

We didn’t provide any definitions of these terms, the results show how people in our team self identified at the point of completing the survey.

Why we ran the survey

One of the unintended effects, as reported in the survey comments and anecdotally, was that it encouraged many of us to think more critically about our own characteristics and privileges.

We chose to frame the questions as we did so that the burden was on the (usually) more privileged groups to tick a box and name their privilege. We know that this way of collecting the data was not perfect. Accuracy of the data collected was not the only goal of the survey and minimising the time it took to complete the survey was not one of our aims.

The mandate for this work comes from the civil service values and the Civil Service diversity and inclusion strategy, which has 2 aims:

Reactions to the survey

There were some responses in the comments section of the survey:

A few designers mentioned that they found the format of the questions confusing or that it took them longer to understand the question. All of the people who mentioned this had multiple characteristics which meant they belonged to dominant groups (which are over-represented in design).

As mentioned before, our aim is to reflect the diversity of the city we work in.

These are the approximate London population proportions of each of these marginalised groups.

As we can’t make a direct numeric translation between the way we framed our questions, and the demographics discussed, we can only approximate the corresponding numbers on our team.

We have used these demographics for London, and our team size of 29 people, to calculate which characteristics are most underrepresented in the design team. If the team reflected London’s population we would have:

We found that some marginalised characteristics are currently adequately represented in our team. To reflect London, we should have:

What we are going to do

In the coming months, we want to make measurable improvements to the equity of the GDS design team by: