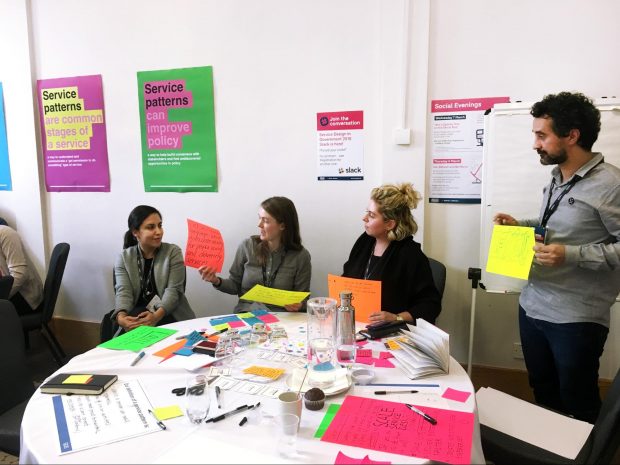 Design patterns are reusable solutions for common problems. In government at the moment there are a number of interaction and content design patterns that are used by service teams across departments. For example, there are patterns for how addresses should look on digital services and for what start pages should look like.

Following patterns means designers can avoid repeating work that’s already been done and make elements of their service consistent with other government services.

We’ve talked about service patterns before, but for the next iteration we wanted to reach out to the wider service design in government network to see what they thought of the concept and whether (and how) they would use service patterns. We took this idea to the recent Service Design in Government (SDinGov18) conference in Edinburgh to get feedback from the audience.

Here’s what we found and how we developed 10 principles for service patterns.

For some time now, people across government have been investigating the potential of developing service patterns.

Lou Downe has previously written about the potential impact of service patterns, saying: “By isolating processes within a service we can improve the way component parts work and create a truly consistent experience of services across government.”

Kate Tarling wrote about the idea of breaking services into stages, to help teams and people across different professions understand how the end-to-end service works.

And Sanjay Poyzer and the GOV.UK Verify team have been working with 20 local authorities to see if there is a common way to deliver a parking permit service. In response to that work, Ben Holliday published his thoughts on service patterns.

Building on this, we wanted to develop a common understanding of what service patterns are. So we held a workshop at SDinGov.

We had a 90-minute session with a diverse audience, including people from local and central government, agencies and charities. There were also a number of international attendees, from countries including Taiwan and the USA (around 35 people joined the session).

We presented 3 hypotheses, based on previous workshops with the cross-government service design community, to help us guide the discussion: 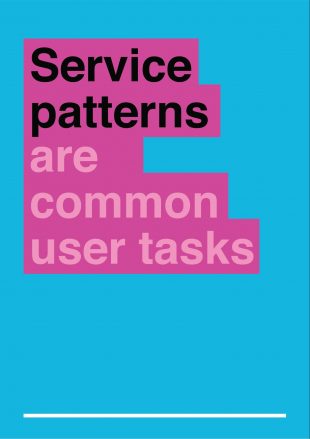 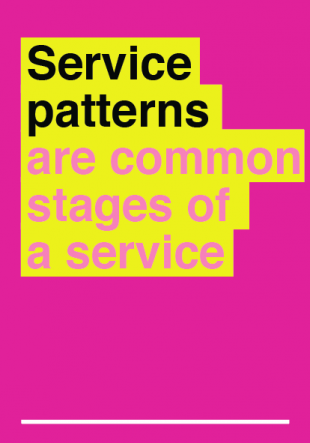 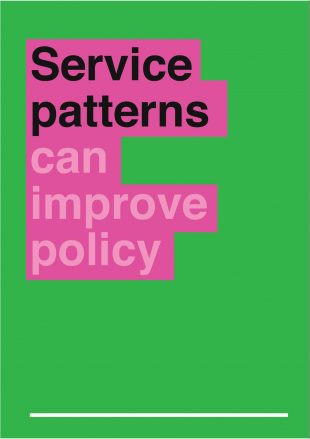 We split the room into groups and asked them to agree on a common definition, using the hypotheses as a starting point to creating their own definition.

We then asked the groups to think about how service patterns could be used in government, by answering these questions:

There was general agreement that service patterns could be created by collecting best practices and working collaboratively across government.

After writing up the discussion notes and analysing them, we found there was a lot of consensus of what service patterns should be.

We developed this consensus into a series of principles for service patterns:

This is nothing new, but we still first and foremost believe service patterns must put user needs first. By 'users', we mean citizens and civil servants. We need tools to make processes and operations easier so that civil servants can better support citizens.

Responding to a common (enough) end user need will make service design in government more scalable as the common problems have been solved – service teams can focus on the really difficult bits. This may or may not speed up delivery, but it should aim to avoid duplication of work. And therefore, in time, reduce cost in delivering.

Service patterns should be able to adapt to changes in policy and also drive changes in policy when a pattern shows a better way a need can be served. They also need to be flexible in that they need to be able to respond to new research and to the specific context of the service. For example, GOV.UK Verify helped remove steps in user journeys when applying for a parking permit by helping some councils change their policy around vehicle details and documentation.

4. Be created in a collaborative way and provide a common language

Service patterns should be created and iterated by multidisciplinary teams. This collaborative process can help all members of the team understand service patterns and what they can be used for. For example, providing commons types and stages for services can be a way of establishing a language for teams to refer to when working on end-to-end services.

Government is shifting to a whole-service approach. This reflects a commitment in the Government Transformation Strategy and is supported by moves such as updating the Digital Service Standard to become the Government Service Standard. Service patterns should reflect this and should help teams build services across all channels, not just digital. The new step by step design shows how online and offline tasks can be stitched together to create a more consistent user journey.

6. Be proven to work

Service patterns should always have evidence that proves the pattern is the best known way to solve the problem. One way of doing this could be to provide open pattern performance data for patterns, to show their effectiveness.

As well as making things better for end users, service patterns should also make service teams' jobs easier and make government more efficient. In order to do this, they must encompass the whole service to transform it from front to back. For example, introducing the service pattern as part of staff onboarding could help frontline staff to understand their role in the user’s journey.

Services need to be continually iterated to keep up with changes in technology and changes in user needs, and therefore patterns must be adjusted accordingly. The Carer's Allowance team in the Department for Work and Pensions is a great example of a team that continues to iterate their service after going live.

9. Be supported with guidance

Context should be provided that shows how the pattern was tested. It’s not possible to test every use case, so users of service patterns should be aware of that so they can decide if the pattern is appropriate to their own context. Design patterns in the Service Manual are all currently supported with guidance, and this will continue to be the case when the GOV.UK Design System launches.

The future of service patterns

Interaction and content design patterns are now commonly used across government and we hope that service patterns could be too.

There are still a number of things about service patterns that need to be explored, such as how they can be made more usable and reusable. And how they will change as design culture across government develops.

We hope that the principles we developed from the workshop can be the starting point for the next stage of service patterns. And ultimately that they could be a tool to help create better government services. Thanks to everyone who joined the session and previous workshops that helped inform this work.

What do you think about service patterns and about the principles we have developed? Join the discussion in the comments section below.