The Design System team at GDS have updated how typography and spacing is defined in GOV.UK Frontend, the new frontend codebase which will replace Frontend Toolkit and GOV.UK Elements.

GOV.UK Frontend is currently in private beta with a small number of teams. This means that when it becomes available in public beta, teams across government will be able to have a single, consistent way of applying typography and spacing.

Why we did this

The existing typography code from Frontend Toolkit, although functional, contains multiple concerns that can make it hard for new developers to understand or edit.

To add another layer of complexity, many government services also use GOV.UK Elements, which sets additional spacing on top of those defined in Frontend Toolkit.

As GOV.UK Frontend will replace both Frontend Toolkit and GOV.UK Elements, we took the opportunity to start afresh with the typography and spacing styles. Here’s what we did:

We drew on our research for the GOV.UK Design System, which is also in private beta. We also looked at regularly occurring issues designers and developers across government have, which come up in the Design Community Google Group and Slack channels. From this, we came up with some basic principles for this work:

Margin should flow in one direction

By aiming for a uni-directional margin where possible, it will be easier to control the layout and avoid any unintended additional space.

Typography defines the spacing for everything else

Once all of the margins have been defined through the typographic hierarchy, these units will be used throughout the design of components and pages.

A user can override defaults easily without adding new styles

We know there will still be times when people may need to override the defaults set in GOV.UK Frontend. It will be possible to override font-size, font-weight, margin and padding within the HTML.

As most government services are iterated over time, it’s important that new styles don’t affect the appearance of any existing styles from GOV.UK Elements or Frontend Toolkit.

Teams should be able to include GOV.UK Frontend in their services and not see any difference until a new component or class is used.

Getting the right values

Font-size and line-height is very consistent across services, so we decided to not make any changes to these. Our initial focus was on defining default spacing values for our existing font sizes, for both small and large screens.

Once we had prototyped these values with long-form and short-form content, we refined them into a single responsive scale to be used throughout everything built in GOV.UK Frontend. 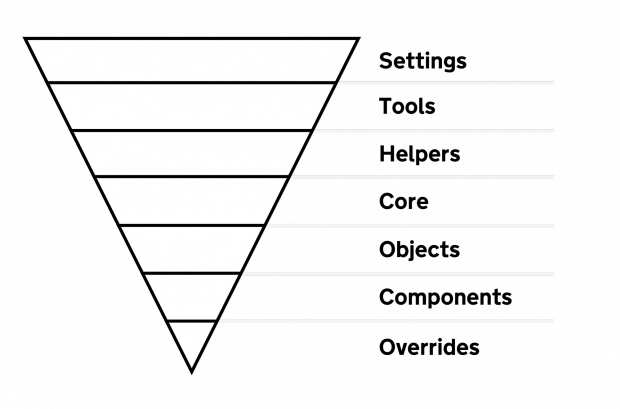 In the settings level of our CSS we use Sass maps to define font-size and line-height for both different size screens and print.

For example, here is the map of 48px type: ‘null’ in this case is the default size on mobile, ‘tablet’ represents tablet and larger, and ‘print’ sets custom sizes when printing out the page.

The settings layer is also used to define the variables for the spacing scale.

Using Sass maps again, we defined the responsive relationship between sizes on the scale. For example:

This means if you use $govuk-spacing-responsive-8, it will equal 50px on large screens and 30px on small screens without needing to define any media queries.

There are a few other variables defined in settings, such as font stacks and font weights.

Within the helpers layer, there are a number of typography mixins. These take the units from the Sass maps and define more specific relationships.

If you want to look at the mixins in detail, you can view the code on GitHub.

The final output in the helpers layer is a mixin that combines the font-weight and responsive font-size.

The core layer takes the mixins and defines the classes that users will use in their HTML.

There will be times where people may need to override the defaults. We have provided override classes that can be added to any HTML element.

If you want to override a default font-size, you can add a class, for example govuk-!-f-48, which will make the font-size 48px.

If you want to override font-weight, the class would be govuk-!-w-bold or  govuk-!-w-regular.

To change the default spacing of an element, you can apply a class like govuk-!-m-r9. The ‘m’ stands for margin, the ‘r’ stands for responsive and the ‘9’ is spacing scale 9. Elements with this class would have a margin of 60px on larger screens, and 40px on smaller screens.

Using the spacing scale within components

Although it’s possible, we wouldn’t recommend using the override classes to define spacing in your entire layout. If you’re building your own components you can include the responsive scale mixin in the same way the GOV.UK Frontend components do:

Although our original intent was to have margin applied in one direction, we made contextual adjustments when required. In certain scenarios, padding-top is added to headings when they follow types of paragraphs.

This padding is only applied in this scenario, not on the heading class when used in isolation.

Making sure it all works together

We recreated pages from a number of citizen-facing services and longer form content from GOV.UK throughout development. This helped us refine the values further and consider applications we may not have thought of.

In the meantime, you should continue to use the design patterns, components and styles found in Frontend Toolkit and GOV.UK Elements.