Using data to understand the content is a useful guide when making design decisions. Knowing that, for example, page summaries don’t usually exceed a certain length, you can make a decision based on this and feel confident that the design will work well for the large majority. It’s also good for highlighting outlier or problematic content (eg a very long page description, hundreds of change notes, hundreds of attachments) – this could indicate that a design isn’t meeting a user need, guidance isn’t clear enough, or that there’s a bigger service design problem.

Late last year we started redesigning publication pages. They’ve been around since 2012, and there are now more than 70,000 publications on GOV.UK. In the time since publications was launched, how has it been used?

It’s seemingly tricky to make changes to something that’s been around for a while and has a lot of published content. To make a start, we wanted to understand the content dimensions: how long page details get, how many attachments are added, and how often they get updated. To answer these questions, developer Edd Sowden ran database queries to get the data. We discovered the following:

How long do page details get?

Anecdotal evidence suggests that users don’t notice the page detail. The page detail is a pretty important part of the page since it describes what the publication is, for example:

Yet there are long-tail examples (page details which are longer than 1000 characters, but with a very low number of examples) which would be negatively affected by moving the page detail to the top, because of the length of the page. It’s worth taking into account that a long page detail isn’t a good thing. Some actually stretch to an entire document’s worth of characters – so it’s possible that some of these examples should be something else (eg a HTML publication).

How many attachments are added?

Attachments are displayed on the publication pages. Original feedback we had was that pages had too many attachments, making them difficult to browse.

We were curious about how many attachments were added on average. If, on average, there were many attachments per publication, it made sense to redesign the attachment to be easier to navigate, perhaps like a statistical dataset with a contents page (or at least have a shorter height).

However, we found that 94% of publications actually have fewer than five attachments, and 74% just have one attachment. That’s a low number. The long tail stretches all the way to 152 attachments, though it’s something of an outlier – and again, is it possible that content with a large number of attachments should use a different format?

How many times are publications changed?

When documents are modified, a change note is published at the bottom of the page to describe the update (with all changes ‘hidden’ under a link): 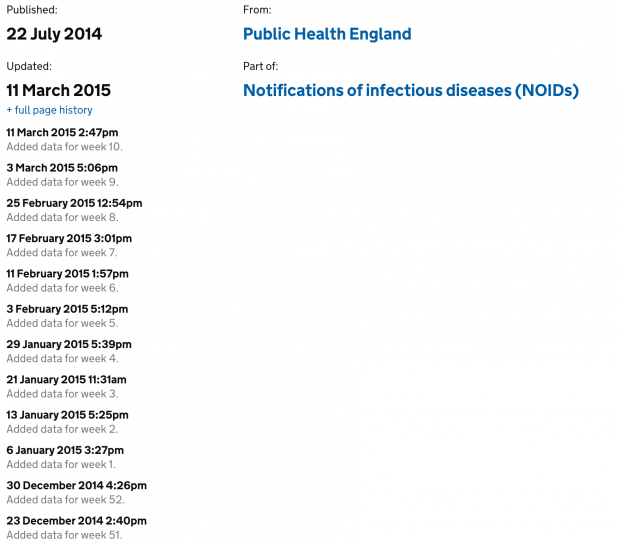 We wanted to look at whether the current change notes design was serving the frequency and length of updates.

A majority (98%) of publications had only three changes or fewer (so the example in the screenshot is unusual). This is low. Most publications aren’t updated after they’re published. Based on the low number of changes, it would have been a fairly safe bet to just display all the changes on the page without hiding any content. However, we’d be sacrificing the experience for some publications like the unclaimed estates list (who publish daily updates). To make the change notes work for a range of content, we’re considering a design that displays three changes, and hiding further changes behind a link.

Our next step is to test the designs with users in the lab!